Film Noir is a term that refers to a “genre” of films made between 1940-1958 (this timeframe is highly debated among die-hard Noir fans). These highly stylized films were typically shot in black and white, and featured sharp contrast between light and dark, chiaroscuro, unusual camera angles (often shot on a slant as if the actors were going to slide off the screen), distortion of height, hypnotic music, and morally degenerate characters driven by greed, lust, jealousy or alienation who commit murder or other heinous crimes. Another common feature of film noir is the femme fatale, a beautiful woman who gets a man to commit a crime for her, and then either one or both of them spiral down to meet their own tragic dooms. Noir stories rarely have a happy ending or a “good guy”.

Noir fiction has its roots in hard-boiled detective stories such as those of Dashiell Hammett and Raymond Chandler and were adapted for the screen as Film Noir. Other authors popular in the noir genre include James M. Cain, Mickey Spillane, and my favorite Cornell Woolrich. In a library or bookstore, noir titles are typically located in Crime Fiction (or Mystery). On the big screen, directors prominent in this genre include Billy Wilder, Orson Welles and Fritz Lang, to name only a few.

Film Noir is the only genre of film I watch, and I am a purist residing in the 1940-1950’s noirs. There was a revival in interest in noir films, and they were produced post 1950’s as neo-noirs. The only modern noir I will watch is Vertigo, which is my absolute favorite film, with Alfred Hitchcock my favorite director (as well as Billy Wilder and Orson Welles), and also because it is a postcard to the beautiful city of San Francisco. Many Film Noirs were shot on location in San Francisco or Los Angeles. As a San Francisco resident, seeing these movies give us a peek into old San Francisco, as many of these movie locations were destroyed by earthquake, fire or modernization.

If you are new to Film Noir, here is my list of favorite noir films. Many of these titles are available through Amazon or by subscribing to cable network Turner Classic Movies (TCM): 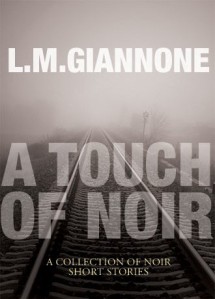 It is in the spirit of Noir Fiction that A Touch of Noir, my collection of noir short stories, was written. Each chapter is a self-contained story, with the majority set in San Francisco between 1945 and 1965. A few of the stories take readers to Las Vegas, Chicago, or Los Angeles. The challenge in writing this book was to live up to predecessors and also to write a complete story within only a few pages, not allowing any time for character development or deep plots. The stories were written with the intent for quick reading. The stories are larger than flash fiction, but shorter than the average short story length. I simply didn’t do this fascinating genre justice, but it is just a “touch” of noir. This series won runner-up Best Crime Fiction Series. If the series continues to do well, I will consider publishing it as a traditional book as well as an ebook.

A Touch of Noir is available for subscription on channillo and chapters are released twice a month. I am restricted from sharing content, but here’s a small snippet from the first installment.

I sat on the edge of the bed. The room was spinning like a top and my eyes were unable to focus. Not like there was much to see. My bed was nothing more than a cot with a thin, back-breaking mattress made of rusty coils and springs. Even bedbugs wouldn’t sleep in it.

I opened the blinds enough to allow a small amount of sunlight in. When my eyes became accustomed to the light, I scanned my small quarters and took a mental inventory of my meager belongings: a toothbrush, comb, pack of Lucky Strikes and an empty bottle of bourbon.

I didn’t always live in this dump. I used to own a house in The Mission before the economy crashed in 2008. I lost my job, savings and home. Before that, I served in Iraq. Now I live paycheck to paycheck driving a cab.

The call came at 4pm. The ring was so loud I thought my head was going to explode. Hangovers give me a headache and boy do I got a doozy right now.

PRAISE FOR  A TOUCH OF NOIR

“I’m peeing my pants I’m so stoked for her new title!” – Benjamin Michael Greene, author of The (In)accurate Assessments of Sage Rathbun, Comagate: Volume I, and Lucid.

“Is there a line I can camp out in to the first to subscribe? — Benjamin Michael Greene, author of The (In)Accurate Assessments of Sage Rathbun, Lucid, Comagate: Volume I, and Lucid.

“Check out A Touch of Noir.   They’re like bite-sized versions of awesomeness.” –Benjamin Michael Greene, author of The (In)Accurate Assessments of Sage Rathbun, Comagate: Volume I, and Lucid.